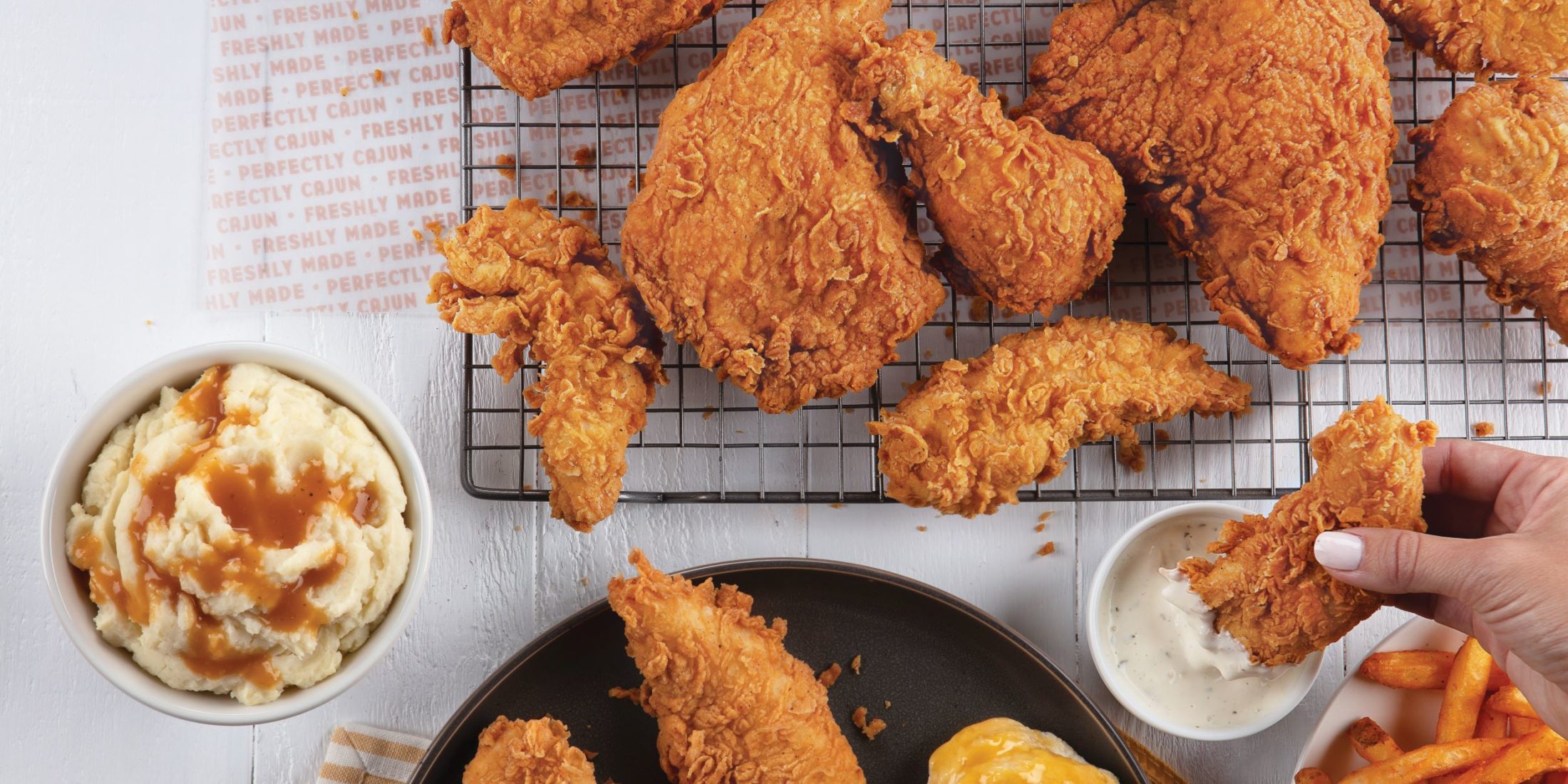 July 18, 2017/Ryan Joseph, Thrillist/ - Chances are you won’t find America’s best-kept fast-food secret at your local strip mall. You also won’t see it clustered among the gaggle of Chick-fil-As, KFCs, and Popeyes that dot the country’s suburban throughways and highway exits.

No, you’ll find this fried chicken franchise in more unexpected places like the Rapid Stop gas station at E. 55th and Payne Avenue in Cleveland, Ohio, or at random rest-stop convenience stores across the South and Midwest. You might even encounter the crispy poultry and fluffy biscuits at a bodega in Brooklyn, spitting distance from a bustling subway stop. Perhaps you’ve seen its name -- Krispy Krunchy Chicken -- adorning some Quik-E-Mart’s signage.

The 28-year-old company might not be as recognizable as Popeyes, but make no mistake: Its poultry can hold its own against the industry standard-bearer. Both chains specialize in Cajun-style chicken (which is heavily spiced, breaded, and flavorful) from Louisiana; but Krispy Krunchy Chicken's perfectly seasoned and juicy pieces might be the most underrated item in fast food today.

While that declaration might sound sacrilegious, KKC's chicken is expertly balanced with the right amount of garlic, paprika, and black pepper. The golden exoskeleton on KKC’s pieces has an airy flakiness and a sturdy architecture that never crumbles, all thanks to the aforementioned spice blend.

KKC also offers a unique set of sides -- another aspect that sets the chain apart (though not every side is available at every location). Like Popeyes and KFC, the chain offers mac & cheese and biscuits, though the latter comes coated in a cocoon of honey. But the menu also includes surprising items like rice-and-pork stuffed boudin bites, jambalaya, peach cobbler, sweet potato pie, and even breakfast empanadas filled with egg and chorizo.

Those in the know are obsessed. “Their fried chicken is ill,” exclaims former Top Chef contestant, New York-based restaurateur, and unabashed KKC fan Dale Talde. “The first time I had it was in Brooklyn," he explains, but he prefers a Miami location that stocks "mounds" of the fried chicken. “I go there every time that I’m in Miami, and I’m in Miami once per month," he adds. "It’s bomb-as-f***.”

Considering that KKC has a jaw-dropping 2,200 locations in 41 states and one US overseas territory, it's surprising that the destination-worthy chicken still hasn’t become a household name. The chain is slightly smaller than Popeyes, which by comparison has 2,700 locations worldwide — only 500 more than KKC — but commands a larger name. (KKC is also larger than Chick-fil-A, which has just over 2,100 locations.)

Talde and Cleveland-based chef Jeremy Umansky, a fellow KKC superfan, were both shocked at discovering that their local KKCs weren’t just local mom-and-pop operations. “Until we started talking about it, I didn’t know they were a chain,” Umansky tells Thrillist over the phone. “I thought it was a one-off. I’ve never seen a commercial or heard a radio ad or anything.” Ditto for Talde.

So why the disconnect? Sure, Popeyes can claim a 17-year head start, a pedigree derived from New Orleans’ lauded culinary culture, and a deep-seated connection with the South. But the largest reason KKC has such an under-the-radar status is because of its unique business model: It almost exclusively targets convenience stores for expansion.

That was company founder Neal Onebane’s plan from the start. As a convenience store operator in Lafayette, Louisiana, he started selling his chicken at five of his locations before a fellow operator, Dan Shapiro, offered to partner up.

“[My dad] and Neal had this thought: Could Louisiana chicken exist outside Louisiana?”, KKC Director of Technology and Communications Allison Shapiro says. “My dad told Neal, ‘Let me try it.’ He brought it to his 15 convenience stores he owned in Kansas and it did incredibly well.”

If fast-food fried chicken were a spectrum, with one end representing the streamlined uniformity of KFC and Popeyes and the other consisting of family-owned bodegas and roadside stands, KKC occupies the middle. Its closest cousins are Wawa and Sheetz. KKC doesn’t actually operate the majority of its stores (KKC does own a handful of extremely rural standalone locations where it’s the only fast-food business in town). However, its chicken’s quality barely varies across locations. The chain requires all operators to use Tyson products and its proprietary marinade, meaning its food thankfully doesn’t share the capriciousness of a convenience store's.

Though KKC was founded in 1989, the company didn't see rapid growth until 17 years later. In 2006, the company exploded from 200 stores to its current 2,200, moving its footprint out of the Deep South during the nadir and recovery from the 2008 Financial Crisis. “The Recession became this period when you could really see the C-store trend take off,” Food News Media Editorial Director Sam Oches says.

“Customers traded down from fast food, but still wanted quality. C-stores were that next rung down," he adds. Most people were in dire financial straits but still needed to feed themselves. This growth was probably also helped by the coming of age of millennials during this time. This is a demographic that values cheap, quality fast food and KKC provides both.

From a quantitative view, the sheer number of locations should make KKC a household name. Allison Shapiro says that the chain is currently ramping up its digital marketing strategy, but its reputation has probably developed because of its low visibility.

The location at E. 55th and Payne Avenue in Cleveland, for example, is on the city’s industrial east side. The sprawling convenience store houses the usual snacks, soda, and cigarettes, but the chain’s red-and-gold advertising plasters the store’s inside and outside windows. At all hours the employees can be found busily moving between the fryers and the golden glow of the fried-chicken case.

The majority of the locations are also not owned by the corporation. “You know who typically owns a KKC? A family.” Talde says. “So they give a shit about what they’re putting out. It’s closer to home. I brought this brand into my establishment, my second home. I brought it in here, so I’m going to take care of it.”

This family-run approach also leaves room for C-store owners to add their own personalized touches to customer experience. “The one by me will deep-fry anything you bring in,” Umansky says. “I stopped by one day and they had a sign advertising it. While I’m reading it, some guy literally came up and brought them some perch filets and they fried them up for him. I’m thinking, Can this be real? And some guy walks in and it became real.”

Even if KKC is by definition a national chain, the mere fact that it appears independent and wholly unique appeals. It’s not some multinational behemoth like McDonald’s. Oches likens it to New Yorkers’ undying allegiance to Shake Shack. “Shake Shack is something that people go bonkers for,” he says. “[It] is very much a corporation. But New Yorkers they don’t care. This is where they go. It’s the local spot they rally around."

Then again, all of that wouldn’t matter if the chicken wasn't also really, really good.

“If someone visited me from overseas and never had American fried chicken, Krispy Krunchy Chicken would be my introductory fried chicken," says Umanksy. "[This would] give them an idea about what fried chicken is truly like in America," he adds. "They’re just doing it right.”